Home Train With Us Get Training Run Club 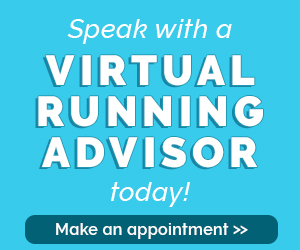 Questions about our Training Programs?

Stay in touch with your local
Run Club!

Free Run Club - We are back!

We are so excited to announce the return of our Run Club on Wednesdays with some new features!

Sign up for Run Club emails to stay in the know about where and when we are running!
Join Run Club Email

We will run rain or shine!

Don't worry, all Running Room locations will still be a meeting place for groups who want to meet up and run during store hours. We will keep your keys and bags while you run! 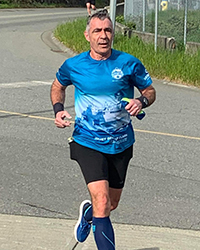 A proud serving member of the RCN for 41yrs, and a devoted family man. My enjoyment for running started in 2014 at the age of 52. I started training myself for a 5k, which quickly became a 10k followed by running my first RVM HM in Victoria in 2015. From that point on its all been a blur. I started running and working at Slater Running Room 2016/17 while still working for the Navy, represented the CAF during nationals 5 consecutive years and became involved in the local running culture. When I returned to Victoria in 2017, my passion was to complete a marathon and assist other runners along the way. Since that time I have completed well over 100 live/virtual events, and assisting others in achieving their goals. I am a member of the CFB Esquimalt Navy Run and Navy Bike committees and over the past 2 yrs an Army Run Ambassador. Currently leading and organizing the Wednesday Run Club in the Victoria area. I can't wait to meet you and let me assist you along the way! 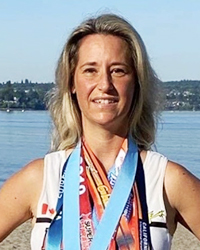 I started my running interest when I joined the Running Room Half Marathon clinic in 2014. I met two wonderful Running Room coaches, Justin and Chris. From that point I fell in love with running. The community is so supportive and beautiful. I ran many half marathons and became interested in running full marathons. In 2018, I ran my first full marathon in Maui and ran a total of 9 marathons in 2018. I had new goals for 2019, to run a 50km and more. I have now completed multiple 60 km races and ran an 80 km virtually in 2021. I am happy to give back to the community and look forward to meeting new and current runners and sharing our experiences together. 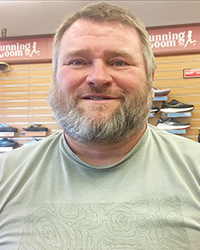 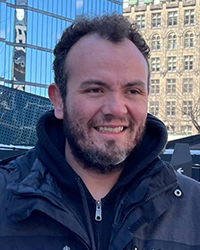 I started running when I joined the Running Room Marathon clinic in 2016 in Calgary with Wendy Swarovski head coach at the Calgary Running Room. The community is friendly, supportive, cool and nice. I ran many half marathons and three full marathons (Calgary, Toronto and Edmonton). Running is an activity that helps me to keep myself healthy, reach new goals and make friends. I am happy to give back to the Edmonton running community and look forward to meeting new and current runners and sharing our experiences together. 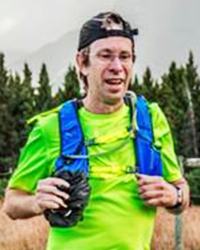 This all began with walking into the Callingwood Running Room in 1996 to sign up for a Learn To Run Clinic. What I thought would just be 10 weeks of my life, never stopped. Now many marathons later- in Kelowna, Victoria, Vancouver, Edmonton and New York City - a ton of other distances, more than a few triathlons - including a couple shots at the Canadian Ironman Triathlon in Penticton – I'm still at it. 16 years ago I took on the task of instructing clinics. The biggest rush still, is seeing those that have taken clinics or just joined us for a run club run, continuing to run. This has become a huge part of my life, no matter how many times I've stumbled and have taken the odd break, like that first love, I've always returned. 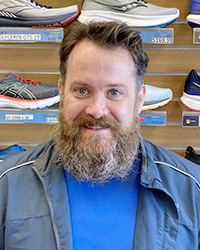 As Running Room's event coordinator in Manitoba, Chris has been organizing popular local and national annual road running events since 2015 including Resolution Run, Hypothermic Half Marathon, Run for Women (Winnipeg and Regina) Break Free (Winnipeg and Saskatoon), Canada Day Run Winnipeg, Winnipeg 10&10, Mud, Sweat and Beers, and Run Crew Relay. Chris has been hitting the trails and roads for most of his adult life and with his entire family running at various points in their own lives, it was easy to see the joy and benefits if offered. 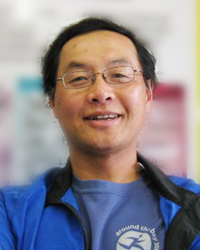 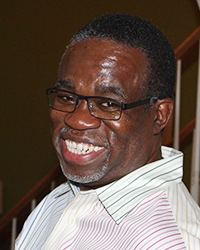 Trevor started running with the Running Room 12 years ago. He started with Learn to Run and progressed all the way through to the Marathon. Trevor has run 4 marathons, along with Around the Bay Races, and Half Marathons. All distances he said he would never run while participating in the 5K Clinic. Due to a knee issue, he's rehabbing and limiting his distances to 10K with the goal of doing the London Marathon. Trevor has coached/lead clinics at the running room for 5 years covering 10K, 1/2 and full marathons. 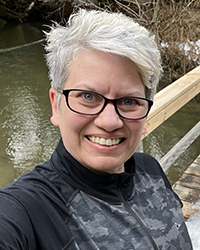 I am an avid runner! I have been running for over 14 years, with experience in both road and trail running. I started running as a way to keep busy when I quit smoking and ended up with another habit - a running habit! I have done over 20 half marathons, over 5 full marathons, and 4 50K races. Yes! I am an ultra runner! I have been an instructor at the Whitby Running Room for many race clinics and was the instructor for the inaugural trail clinic. I enjoy meeting new people, making new friends, and experiencing the joy of running. When I'm not working or running, I love spending time with my family, my dogs, my friends, golfing, camping and enjoying the outdoors. 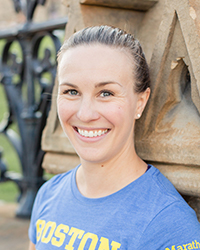 Ottawa native, Vanessa de Hoog is a former Queen's cross-country athlete who has raced every distance from the 5km to Marathon - including Boston! In 2019 she founded a free track club for youth called the Kanata Mavericks. In 2021 she became one of the first Canadian coaches with the Girls on the Run program when it launched in Ottawa. She has published several articles in iRun and enjoys spending her free time sipping espresso and cuddling her cat, Gatsby. 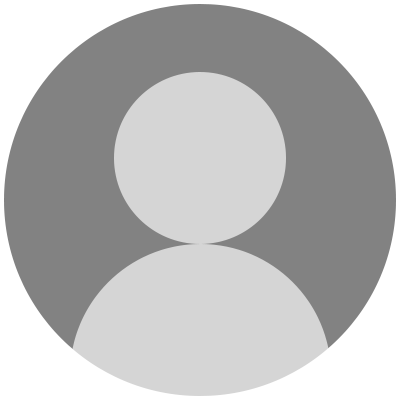 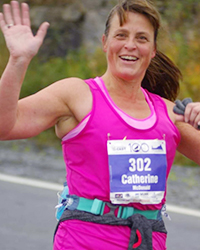 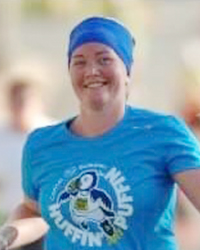 My name is Catherine McDonald and I started running with the Running Room's learn to run August 2014 and instantly fell in love with running. I started coaching with Running Room in 2018 and enjoyed every clinic I coached. The best part of running is the people you meet and friends you make. I am eager to get back to hitting the pavement and sharing my love of running with you. 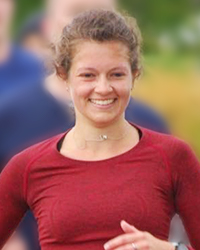 Hi everyone! My name is Michaela Forgeron, and I'm super stoked to be the Run Club Leader for Moncton Running Room! I started running when I was 14 years old as part of my school's cross-country and track & field teams and continued non-competitively after high school to challenge myself with longer distances. I moved to Moncton in 2018 from Cape Breton, NS, and getting involved with Running Room helped me meet so many runners in the area and helped me achieve my running goals! I have run everything from 5km to the marathon, and I can't wait to run more miles with Run Club! 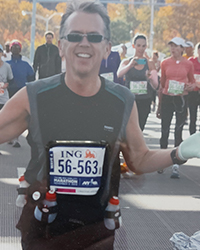 Joined the Running Room's Learn to Run program in 2005 and have been 'running the roads' ever since! Seven marathons and fifteen half-marathons later, I'm still running although now my goals are different: being active, keeping fit, enjoying the great outdoors (12 months a year!) and running with others for fun!

In addition to the practice sessions as a member of the Running Room Club you will receive free on-line access to the Running Room Running Club on-line. As an on-line member you will have access to your own customized training log, manage your own personal profile and with your consent we will send email updates from Running Room, including announcements, local and national event information or promotional offers which we think would be of interest to you. You can withdraw your consent at any time.

If you are a Rewards Club member or are registered in one of our Training Programs then you are already a member. If you would like to be a member of the Running Room Club, simply fill in your name and e-mail address, nothing else is required. 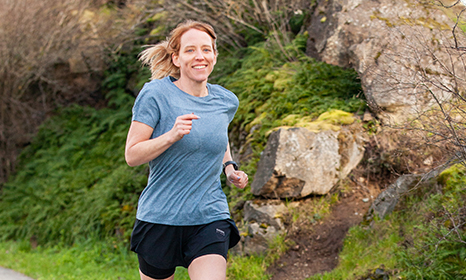 Track your rides and runs via your iPhone, Android or GPS device, analyze your performance, and compare with friends. Join with runners across North America to share your progress, routes and passion for running.

Be Inspired, challenge yourself. Pick an event goal for yourself for 2022.

Let our team of experts answer your every question.

built and powered by Commer

Before creating a race, you must first login if you have a profile or set up a profile.

One you are logged in you will then be redirected to the Race Form afterwards.